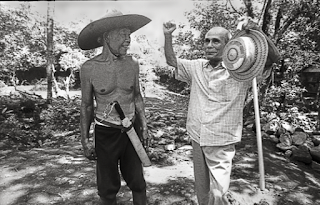 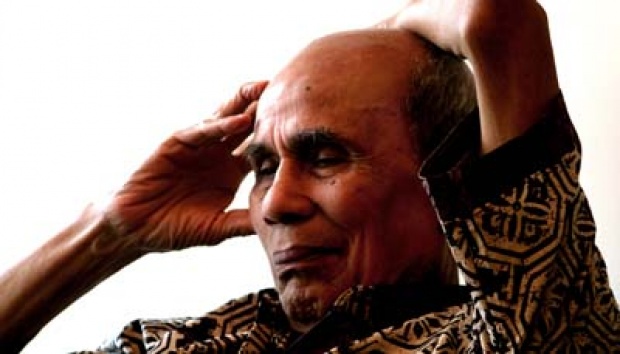 I wrote this article in 2005, for the Garuda Inflight magazine, when Pramoedya and Sitor were both still alive. The photograph of the two men together was taken by Poriaman Sitanggang one memorable day when he was taking Sitor up to visit Pramoedya, with me tagging along for the ride. It was the first time these two old men had met since Pak Pram had been released from prison, maybe the first time since 1965. When we arrived, Pram was hard at work in his yard, hacking away with a machete, clearing weeds and shifting rocks. Sitor took one look at him and laughed out loud:

“Didn’t you get enough of that on Palau Buru, Pram?!” he called out.

It’s different when it’s your own garden, Pramoedya said, stone-faced.

And very soon, they were arguing and fighting, rehashing history, talking about the events leading up to 1965. Pram was harsh and unforgiving about journalists, writers and other cultural figures that he considered to have supported the suppression of the communist party and the rise of the New Order, despite the fact that many of them later became great critics of the regime. Sitor tended to be more forgiving. They had no way of knowing what the New Order would become when they supported it, he said. But Pram shook his head stubbornly. He wasn’t going to forgive them, not then, not later, not ever.

Poriaman and I sat in the background. I wish I’d been able to record the conversation between the two great Indonesian writers. But it was a private conversation. I feel incredibly privileged that they let me sit there to listen.

And it was time to go home. In the car, Sitor roared with laughter at the conversation that had just taken place. Pram was a tough, harsh old man, he said. He had always been a miserable bastard, he added. Then he shook his head, and was silent for a few moments. “He never stopped believing,” he said. And then he said no more.

I don’t know if they ever met again.

And a few months later, at the Garuda Magazine, we were instructed to write a story about Toba. It was difficult, we didn’t have a travel budget and I didn’t like the look of the pre-written stories that people offered me. So I decided to see if Sitor would do an interview with me. Instead of a story about Lake Toba, I’d write a profile about the great poet from the Toba region. And this is what I wrote.

Between the Strait of Malacca and Indonesia’s ocean
Stretches the island of Sumatra,
With the Barisan Range straddling it from end to end.
and on it a lake, and on the lake an island:
My beloved Samosir

Sitor Situmorang is many different things to many different people. He is one of Indonesia’s foremost poets, a world traveller, a sometime journalist, a writer of short stories, an activist, an intellectual and a prominent literary figure. He inhabits many seemingly disparate worlds: He is a tribal Batak, fiercely proud of the village in which he was born, its people, their robust and vigorous history. He is an Indonesian, a towering figure in national literary circles, with more than half a century of involvement in the intellectual life of the nation. He is a citizen of the world, widely travelled, at home with the jargon and argot of anthropology, literary criticism, and social theory in half a dozen languages, and often cited as a potential candidate for the Nobel Prize for literature.

He is also an irascible old man.

When I arrive at his home in the leafy suburb of Menteng for an interview, he displays his considerable charm for a full minute, ushering me fussily into his living room, and offering me a seat and a cup of strong black coffee. I have arrived with a folio of photos by the prominent and eccentric photographer, Poriaman Sitanggang, depicting Sitor on a trip to attend a Toba Batak reburial ceremony for a member of his clan, where the bones of his deceased relative were exhumed and subjected to a further round of rituals several years after the death, near his natal village.

Quite recently, a mere hundred thousand years ago, the most powerful volcanic explosion the earth has ever experienced tore the island of Sumatra apart, creating the world’s largest caldera, which filled with water to become Lake Toba, the deepest lake in the world, and one of the largest. Another, smaller explosion created a peak in the middle of the lake, which split and crumbled to form Samosir Island, the largest inland island in the world, surrounded by jagged, rocky cliffs and rich volcanic soils. Sitor was born in Harian Boho, a village by the side of the lake, where as biographer Henk Maier notes, “… the wind falls from the mountains down on the water in the early morning, creating waves and unrest on the shores.”

Somehow, when you meet Sitor, the turbulence of the region into which he was born seems entirely appropriate. My idea was to show Poriaman’s photos to Sitor, to entice him into telling me the story of his people, his region, his place of birth, to have the story of the Batak people in the words of the great Batak poet.

But Sitor is not impressed with my ruse, nor with my project. At this particular moment, he decides, he has no particular desire to be a spokesman for the Batak, to tell stories about what he describes as “pretty pictures, empty of meaning.” Right now, in fact, he would rather talk about one of his poems, inspired by the ancient Javanese-Buddhist monument, Borobodour.

When I try to draw him back to the photos and the subjects they describe, he is suddenly quite angry, angry to find himself pigeon-holed by my questions. He hurls his walking stick with full force onto the stone floor and berates me for not having done my homework, for not being properly prepared to ask more penetrating questions, for not having read even one of the many great anthropological works that describe the history and culture of the Batak. He compares me unfavourably with VS Naipul and a host of other great writers and eminent journalists to whom he has generously given his time.

And just as suddenly, the gust passes. Sitor is calm again, his rapidly blinking eyes the only sign of his recent exertion. I take advantage of the pause to push forward a photo of Sitor, standing, scowling resolutely, leaning against a tree in the forest. The photo contains no particular hint of the significance of the place in which he stands, which is upon the site of the ruins of his father’s village. With a certain cunning, I quote several lines from one of his poems, Pilgrimage, a poem inspired by the place depicted in the photo:

Most writers will be mollified by some sign that you have actually read their work, and Sitor is no exception. With a residual sigh, he picks up the photo and begins to talk.

The ‘old settlement’ of the poem is the stronghold of Ompu Babiat, Sitor’s father, a warrior and chief who ruled over an area covering “three hills and valleys,” stretching down to the shores of Lake Toba, and within full view of Pusuk Buhit, the sacred mountain and orientating point for communal ritual, where Si Raja Batak, the mythical ancestor of all the Batak tribes, descended from Heaven. Sitor describes this place as:

Earth’s ladder to heaven,
From where the first man once came

The Bataks of the highlands were among the last of the Indonesian peoples to be conquered by the Dutch. Living in the sparsely populated and infertile hinterland, their villages were fortified with earthen and bamboo walls. They cultivated their reputation for ferocity, and were often accused of being cannibals. “That is a lie!” shrieks Sitor, when I raise the issue, “That was something the Dutch made up to make the Bataks look like savages!”

Ompu Babiat, who fathered Sitor at the age of seventy-three, resisted the intrusions of the Dutch between 1884 until 1908. When the Dutch forces finally overran his village in the rugged highlands, they burned it to the ground and forcibly moved the inhabitants down into the valleys, where they could keep a closer eye upon them.

Sitor pauses, obviously tired at the conversation. The photo he holds, he feels, shows little more than an old man standing next to a tree in the forest. But the forest is filled with more than trees, it is filled with stories and memories that are too confusing and too complicated to be conveyed in a few simple soundbites. Sitor’s outburst earlier, his anger at my idea that he should place himself in an easily understood context, becomes more comprehensible. Perhaps we should not ask a poet to explain himself, his people, his culture, or even his poetry, in prose. As Henk Maier says: “Poems should speak for themselves. Sitor’s poems do just that.”

Sitor Situmorang died on 21 December 2014  in Apeldoorn, Netherlands, at the age of 91. An anthology of his poetry, translated into English, entitled “To Love, To Wander,” is available from the Lontar Foundation in Indonesia ( http://lontar.org/product/to-love-to-wonder/ ) .