Nusa Tenggara Timur is one of the poorest provinces in Indonesia. Malnutrition affects many people, but particularly women and young children. Children here are often too skinny and too short for their age. Worm infestation, anemia, coughing, and diarrhea are also common among babies and young children.

The long-term impact of malnutrition on human development can be devastating. When children are badly nourished for their first two years, it has an impact on their health, educational achievement, and productivity for the rest of their lives. Regional and national governments of Indonesia, assisted by development agencies, have dedicated a large amount of resources to overcoming the problem of malnutrition. While programs implemented by these agencies have helped, many of the poorest people still don’t get enough of the right food to eat.

Through the community health system, health workers encourage sound nutrition and promote other healthy practices in the community, such as immunization and vitamin A supplementation. All mothers of young infants are strongly encouraged to attend monthly meetings led by kader (volunteer community health workers) and midwives. At these meetings, babies are weighed and measured. Information on hand-washing, immunization programs, and nutrition is also disseminated. Mothers are encouraged to breastfeed infants and provide young children with nutritious foods available locally. When children suffering from malnutrition are diagnosed, the health system sometimes provides supplementary food or other assistance to the parents. In the worst cases, a child may be referred to inpatient facilities for treatment.

However, not everyone is equally well placed to benefit from the support this system provides. Some people are barely able to comprehend the information it provides. In Nusa Tenggara Timor and other parts of Indonesia, many people, particularly women, have never attended school and therefore can’t read or write. In some cases, they may not be able to speak Indonesian, which is the language in which all health information provided by the government is prepared. With midwives and health workers often coming from other islands or districts, poorly educated women may be barely able to understand what they are saying to them.

In a place where most people are poor, there can be a huge difference between owning a tiny plot of land and owning nothing at all. When a family owns some land, one parent, often the mother, may be able to stay with her children for most of the day. She may be able to take them with her while she works in a garden near her house. When a family owns no land and is entirely dependent on wages from agricultural labor, all adults and even older children are often compelled to seek work year round, often far from the home – which means that there are no adults to supervise the feeding of children.

Poverty can be exacerbated by not having family and friends around. Often, when people are indigenous to an area, they have an extended network of people to support them. Even when both parents in a household have to work for wages in the fields, those who have this sort of network are much more privileged than those without it. An established household whose members have relatives in the district may be able to keep an elderly grandparent or another member of the family in residence. Refugees, newcomers to a district, and displaced people often have no one to look after their children.

Some people are just too poor to take advantage of programs intended to assist the poor. Even when health care is provided free of charge, it may still be too expensive. It may simply cost too much for a family to travel by bus to a town with a clinic. They may not be able to afford to take time off work to accompany a child. Even if they are provided with supplementary food for their children, they may not be able to make sure that these children eat it in the right amounts at the right time.

The health workers in Indonesia’s villages are usually diligent, but their resources are limited. With very limited resources, it is clear that caregivers often concentrate their energies on those whom they feel will respond best. When a family seems simply unable to follow their advice or take part in their programs, in the end, they may give up and concentrate on the many others who also need assistance and support. 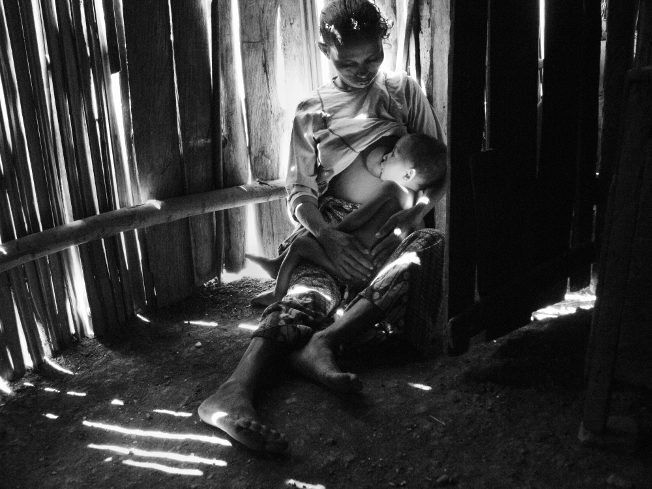 “What would I like the government to do for us? I don’t know. We need rice and milk.”

My son’s name is Antonius. He’s three years old. He’s gone down to 6.7 kilos now. When he got out of the hospital for children with severe acute malnutrition, he was up to 9.7 kilos. He was there for about two weeks. Before he went in, he was coughing and had diarrhea. When he came out, his cheeks were fat and he could walk well. But he’s lost weight again, and the diarrhea has returned.

I’ve had four children. One died. Now I take my children to be weighed on “mothers and infants” day at the community health center once a month. They never give me advice or information about feeding my baby. There isn’t any information about family planning or anything like that. They just weigh the young children and write down the data.

Once they gave me some special PlumpyNut biscuits for Antonius. But as soon as I gave them to him, his diarrhea got worse, so I stopped. I think he’s allergic to them.

I work in fields about an hour’s walk from here. My husband works in the fields, too. I get paid Rp 20,000 a day. I can’t take Antonius with me when I work. I leave him with his older sister to look after him. She’s eight years old. She doesn’t go to school. We can’t afford to send her. The older sister makes sure the younger ones eat.

I cook rice or crushed corn and leave it on the table for the kids to eat. I buy a kilo of rice a day for me, my husband, and the three children. The cheapest rice costs Rp 5000 per kilogram. Corn is cheaper. We buy corn when we don’t have enough money for rice. Sometimes we have vegetables with the rice, but today it’s just plain rice with salt. Yesterday we just had plain rice, too. We don’t have enough land to keep a vegetable garden, but the neighbors let us grow some vegetables on the edge of their land.

When Antonius was just born, I breastfed him. I took him to the fields with me then. I took his older sister along with me to look after him while I was working and took breaks to feed him. When he was four months old, I began to leave him at home. I breastfed him in the morning and then left him a bottle of sweet tea. His sister made sure that he drank it. Then I breastfed him again when I got home. Once or twice the community health center gave me some milk for the baby, but they say they don’t have funds for it now.

I’m originally from Timor-Leste. I came here as a refugee in 1999 with my family. They all went back a few years ago. My husband is from here, so I stayed here, too. I’ve never been back to Timor-Leste. You need a passport, and it costs too much. I’d like to see my family again. At home, we speak Tetum or Marrai. I went to primary school for a few years, so I can speak Indonesian. I can’t read it or write it, though.

What would I like the government to do for us? I don’t know. We need rice and milk.