Incest, rape, and domestic violence are all taboo subjects. Women who are beaten, tortured, or abused by their husbands may be isolated from any community support.

On 19 January 1999, communal conflict between Muslim and Christian communities broke out on a massive scale in Ambon City, Maluku. In the days that followed, the conflict rapidly spread across the island of Ambon and beyond to a number of other districts in central and southeast Maluku.

By the end of the year, more than 100,000 people had been forced to flee their homes. Previously integrated communities became divided along religious lines. This resulted in large numbers of internally displaced people unable to return to their previous residences. In addition, thousands of houses and places of worship were destroyed.

By November 2001, in the period when the most extreme acts of violence occurred across the province of Maluku, according to some estimates more than 13,000 people had been killed. Many more were maimed and injured. Large numbers of people participated in, suffered from, or witnessed acts of extreme violence. Many saw family members and friends being killed. Entire communities were driven from their homes and villages.

In Ambon, the psychological impact of the conflict has been alleviated by communities working together to deal with practical issues. After the conflict, when the government established a public trauma counseling drop-in center, very few people used the service. People were much more willing to become involved in activities that they considered practical, such as children’s playgroups and communal housing projects, or even working together with former enemies to achieve common aims. All these community activities may alleviate psychological trauma.

It is much more difficult to involve the community in dealing with issues it isn’t prepared to acknowledge or face. Incest, rape, and domestic violence are all taboo subjects. Women who are beaten, tortured, or abused by their husbands may be isolated from any community support.

When women are not supported by the community, they can learn to help each other. As part of this process, group therapy for women who have had similar experiences is an extremely effective tool. By meeting with other women, women can overcame their feelings of isolation, the sense that they are to blame for the violence and abuse that they have suffered. As well as providing psychological support, the women can assist each other in practical matters related to divorce, housing, and employment.

An Ambonese journalist named Leli would like to take that further by establishing a residential shelter where people with similar experiences can support each other psychologically, socially, and economically. Such shelters could provide the support that remains lacking in the broader community. 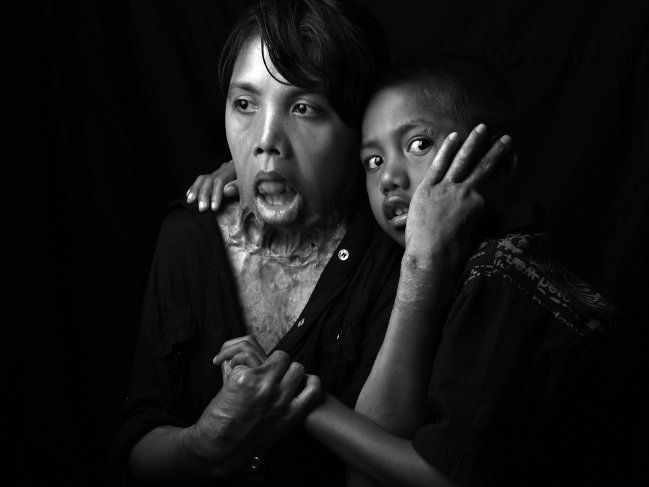 “My husband came home after midnight. He was drunk. He started smashing things. He hit me and shouted at me. When I answered him, he grabbed a kerosene lamp and poured the kerosene all over me. Then he set fire to me with his cigarette lighter.”

My husband set fire to me in 2003. I was in the hospital for eight months. He was held in the police station for three months, but he was never charged. The police let him go. They said there weren’t any witnesses to prove there was a crime. But he tried to kill me. He picked up a plastic bucket when I was still burning. He put it over my head and held it there. The plastic melted all over my face. He wanted me to die. Of course he wasn’t going to kill me in front of witnesses.

Later, my husband said that the stove had exploded. When I was still in the hospital, he came and threatened me. He made me say that that’s what happened. When the police took my first statement, that’s what I told them. Later, I told them what really happened. But they said it was only my word against my husband’s. My husband’s father used to be in the Air Force. He is retired now. He gets a pension. The police don’t want to get involved in a case with a member of the military.

My boy’s name is Rezza. He is eight years old. He is living with my mother-in-law. She lives about one kilometer away. I’d like to look after him myself, but I can’t. I can’t lift my arms. I can’t move my head. I can’t eat properly, the food falls out of my mouth. I can’t look after my own child.

My mother-in-law is good to me. She often sends me rice. She let me build a house on land that belongs to her. She sometimes sends me money. But she has never talked to me about what her son did. After my husband tried to kill me, he moved back with her. He found himself a new wife. No one in the village punished him for what he did. No one in his family blamed him. In Ambon, it’s normal for men to hit their wives if they talk back to them. When I visit my boy, I see my ex-husband fight with his new wife. I heard he’s threatened to do to her what he did to me if she doesn’t watch herself.

I want an operation. I want to be able to move my arms again. I don’t care about the way I look, but I want to be able to look after myself. I want to get a job or run a business. There are a lot of factories in this area. I could get a job in a factory if I could move my arms. I could look after my own child. I wouldn’t be dependent on my mother-in-law. The doctors said I’d need to go to Makassar or Surabaya to have an operation. I don’t have the money for it.

When I got out of the hospital, I went to the local newspaper to show them what happened. I thought that if they published a story about me, someone would give me the money so I could have an operation. That’s how I met Ibu Leli. She was working at the newspaper. Several newspapers published my story, and the deputy mayor promised the local government would pay for my operation. But later, whenever I went to try to see her, her staff said she was busy or sick or in a meeting. In the end, I gave up. I never got anything.

I went to the deputy mayor’s office by public transport. I’m not ashamed of the way I look. I know that it’s not my fault that this happened. I’m not going to let it stop me going out. No one has ever said anything to me about my face. People in the street are mostly kind to me. No one says anything.

Ibu Leli once took me to meet Augustina. She was hurt by a bomb in the conflict. She’s got a few scars on her face, but she wasn’t nearly as badly disfigured as I am. Even though her face is hardly damaged at all, she’s too embarrassed to go out of her house. When I met her, we just talked for a while. She’s a nice person. We joked and talked. She shouldn’t be so shy.

While this book was being written, Irfan and Poriaman contacted community and social worker Maya Satriani, plastic surgeon Enrina Diah, and the columnist and writer Julia Suryakusuma to see if anything could be done to alleviate the terrible scarring and disability suffered by Santi. As a result of the efforts of these women, funds were raised and facilities provided for Santi to undergo the first of several operations she will require. In a small way, Santi’s story shows that when society begins to see and understand the needs of marginalized people, it can make changes that will allow them to be included in society.