Waria are a marginalized group with a distinct identity. They have a cohesive subculture with strong social links between members. Through the small businesses owned and operated by successful and established waria, these waria become patrons, mentors, and protectors to other members of their subculture.

In Indonesia, some biological males dress, act, and behave like women. They are known as waria, a term derived from a combination of the Indonesian words wanita (woman) and pria (man). Sometimes, during brief interactions, they may be mistaken for women. However, they are usually recognized as being waria rather than women. Often, they consider themselves to be part of a distinct group or even of a separate gender. They feel they are not quite men and not quite women: they are waria.

At best, the position of waria in Indonesian society is ambiguous. In some local traditions, waria play a prestigious role in society. One example is the Bissu priests, who acted as ritual specialists and advisors at the courts of the Bugis kingdoms of South Sulawesi. These priests adopt a number of feminine manners and styles and considered themselves to be neither men nor women.

However, when most Indonesians see or notice waria, they see them as flamboyant low-rent sex workers soliciting from the sides of the street, or as lowbrow comedians and entertainers.

In East Java, ludruk is a coarse, improvised, traditional music-hall style genre. It is popular mainly with poorer, working class Indonesians. Until recently, waria were employed almost exclusively to play the female parts in this theater form. Irama Budaya is one of the few remaining ludruk theater groups with a permanent base in the city of Surabaya. It is also one of the few groups that continue to use waria to play female roles.

When ludruk is performed elsewhere, it has been made respectable by eliminating the waria. When it is performed by government-owned radio stations, the female roles are now almost always played by women, not waria. These female actors are often graduates from dance academies. In these performances, the crude sexual innuendos of more traditional ludruk performances are removed, and the biting social commentary is toned down.

Irama Budaya is part of a fading tradition. It operates from a small, grubby theater near Surabaya’s main bus station and next to a filthy, polluted river. In the cigarette smoke–filled hall, thickly made-up performers wearing padded bras flirt brazenly with the mostly male audiences. Many of the waria who perform here have sex with favored patrons, often in exchange for cash. As marginal, low-status entertainers who engage in sex work, the waria of Irama Budaya are what most Indonesians imagine all waria to be.

However, many waria live respectable lives. Some, such as Sofa (see profile), manage to overcome the negative stereotypes to achieve acceptance, even prominence, in the community in which they live. As a certified primary school teacher, Sofa occupies a highly respected position in a conservative Madurese community. As the owner of a successful beauty salon, she is also a highly respected figure in the small community of waria in the surrounding area.

In large cities, waria often operate formal peer support groups, information and counseling services, and vocational training programs for members of that sub-culture. One example of such a group is Surabaya’s waria organization, Perwakos, which is headed by Irma Soebechi. Such organizations are rarely found outside large cities or towns.

Waria often work in the beauty industry. Even in relatively remote rural areas, many hair and beauty salons and bridal costume rental services are owned and operated by waria. In these rural areas, hair salons and beauty parlors operated by successful and established waria perform many of the roles of the formal support organizations in larger cities.

Waria are a marginalized group with a distinct identity. They have a cohesive subculture with strong social links between members. Through the small businesses owned and operated by successful and established waria, these waria become patrons, mentors, and protectors to other members of their subculture. Through this social network, young, insecure waria from the villages can find a path to acceptance and prosperity. 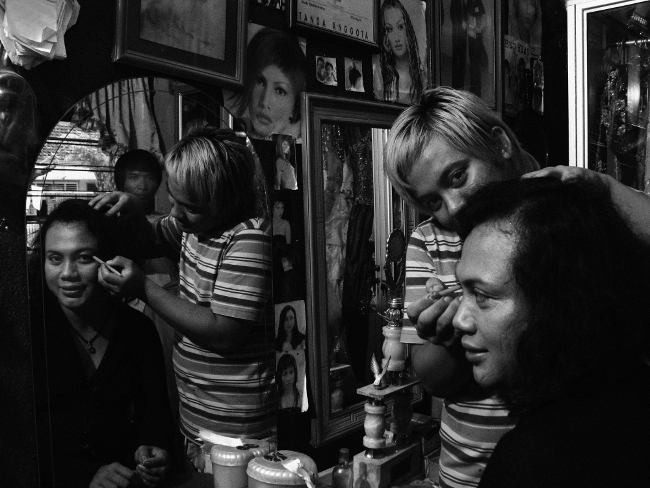 “I don’t think I’ve ever really experienced much discrimination. People here don’t judge you badly just because you are a waria. They judge you by how you behave and what you achieve. If a waria behaves properly, then nobody minds the fact that she dresses up in women’s clothes and puts on make-up.”

I always knew I wasn’t a boy, even in my earliest years at primary school. I always played with girls and girls’ toys. While my brothers liked flying kites and playing football, I preferred playing with dolls. I always liked dressing up. So I don’t think anyone in my family was shocked that I became a waria. It wasn’t something that happened suddenly. I didn’t suddenly come out. I was always a waria.

I don’t think I’ve ever really experienced much discrimination. People always say that Madurese society is extremely conservative and fanatically Islamic. In some ways, that’s true. It’s true that the Islamic religious schools and communities, and the teachers and preachers are very powerful here. But at the same time, the community is very tolerant. If you don’t interfere with other people, they don’t interfere with you. People here don’t judge you badly just because you are a waria. They judge you by how you behave and what you achieve. If a waria behaves properly, then nobody minds the fact that she dresses up in women’s clothes and puts on makeup. If a waria does sex work on the streets, of course people are going to judge her negatively. But that’s not because she’s a waria, it’s because she’s selling sex.

I’m a teacher at the local primary school. I’ve completed the full primary teacher certification process. I’m a permanent member of the civil service corps. Out of 300 primary school teachers in this sub-district, only twenty have completed the full certification process. It’s quite an achievement. Completing the certification process is not just a matter of passing exams. You need a testimonial from the school principal and the school board. The school board includes community representatives. I couldn’t have done it if the community didn’t support me. Everybody knows I’m a waria. Nobody holds that against me.

When I teach at school, I wear a male teacher’s uniform. The children call me “Pak” (Sir). I don’t mind wearing a man’s uniform. That’s the regulation. I’m prepared to accept that. I don’t go looking for confrontations. I don’t feel I have to prove a point by wearing a woman’s dress or make-up. But this is a small community. Everyone here knows that I’m a waria. They’ve all seen me in woman’s clothes wearing make-up. No one at school ever makes any negative comments about that. At the most, some of the other teachers laugh and joke about a dress they saw me wearing. They tease me about how pretty I look. I don’t care. I take it as a compliment.

There aren’t any other school teachers in the district who are publicly known as waria. But even so, there are a lot of very effeminate men who are teachers. It’s not like being a policeman or a soldier. The kind of person who becomes a teacher is a softer, more caring sort of person. Those are feminine characteristics. The people around me are not judgmental.

I also run a hair and beauty salon in the village. I set it up twelve years ago. It’s doing quite well now. We also offer make-up and bridal costume rental services for wedding ceremonies. That’s very profitable. I’ve got two full-time staff. They are both waria. But all the young waria in the district hang out here. There is usually a group hanging out here until late at night. Some of them spend the night here if they need a place to sleep.

Some of the waria in the village are very young, only fourteen or fifteen. Some of them have never left the village. They don’t have access to any of the waria support groups in the city. They come here to talk to older waria. We are like older sisters to them. We can set a good example for them. They see that it’s possible for a waria to be successful and get a good job. Often the young ones help out around the salon, just tidying and cleaning up and such. If they are talented, they can learn how to do haircuts. They can learn skills to earn a living later on.

I’ve been involved in providing outreach and counseling services for Perwakos, the waria advocacy organization in Surabaya. I have pamphlets and condoms at the salon. If I know that young waria are having sex, I tell them to use condoms. I warn them about HIV and AIDS. Some people might be shocked at the idea of fourteen or fifteen year old boys having sex. I reckon that if they have sex, then they should do it safely. You can’t just pretend that it doesn’t happen.

It is true that a lot of waria hang out on the streets, looking for sex. Sometimes they do it for money. But it’s not always about money. Waria go to their beats on the streets to hang out with other waria. It’s where they go to show off and have fun. Part of the fun is looking as sexy and gorgeous as you can. It’s part of the process of coming out as a waria. Of course, waria can’t hit on men in public like that in the village. In the city, there are areas where it’s acceptable. In Surabaya, the city has several tolerance zones, such as the beat on Jalan Irian Barat. In those places, waria aren’t usually bothered by the police or the security officials.

There are other places for waria to socialize and act out in public. The Miss Waria beauty pageant is a socially acceptable way for waria to dress up and express themselves. The pageant changes the way people look at us. It changes the way we see ourselves. We want to put on a spectacle that proves that waria aren’t low class. I was on the selection committee for the East Java pageant. I took some of the young waria from my salon in to see the event. It’s good for them to see high-achieving waria.