Members of the Cina Benteng community say that they are discriminated against in a number of ways. For example, they claim that are not usually included in food assistance programs and do not receive other benefits intended for poor members the community.

The Tegal Alur district is on the edge of Jakarta, where the city’s suburbs merge with the surrounding satellite towns and industrial zones of Banten. A generation ago, market gardens and small farms predominated. Many of the people who used to farm the land there have been pushed aside to make way for the development of huge factories, housing estates, and infrastructure projects.

With the toll roads bringing these areas within reach of middle class commuters, there are huge numbers of newcomers in the area. Descendants of the original inhabitants of the district work on the industrial estates as laborers. Many more scratch out a living as scavengers, rooting through the piles of discarded rubbish created by the factories, or provide services as motorbike couriers and running food stalls. Further away from town, people survive by fishing and working as agricultural laborers. Unemployment levels are high. Gambling, alcoholism, and drug use are common.

The original inhabitants of Tegal Alur and surrounding areas consist of at least two main ethnic groups, including the Malay-speaking, mainly Muslim Betawi and the Cina Benteng. The latter group claim descent from Chinese immigrants from the fourteenth century.

To a large degree, members of this group have been assimilated by the culture of the surrounding area. Like their neighbors, they speak Betawi Malay. They also engage in similar kinds of work and trade. Like many other people in the area, many of them are very poor. Unlike most of their neighbors, many of them identify as Christian or Buddhist. While they do not speak Chinese languages, they retain some elements of Chinese culture, including veneration of ancestors and certain wedding customs. They continue to identify and be identified as Chinese.

Like many other people who live and work mostly outside the formal economy, many people from the Cina Benteng community do not have complete documentation of their civil status, citizenship, and other matters. Often births and marriages are not registered. Thus manymembers of the community are not in possession of birth certificates, marriage licenses, or identity cards.

The same hold true for many in the Betawi community in the area. However, members of the Cina Benteng community often claim that because they continue to be seen as Chinese, the barriers in their path to acquire this documentation are formidable.

Members of the Cina Benteng community say that they are discriminated against in a number of ways. For example, they claim that are not usually included in food assistance programs and do not receive other benefits intended for poor members the community. Government officials dispute these claims, stating that benefits are provided strictly according to need. 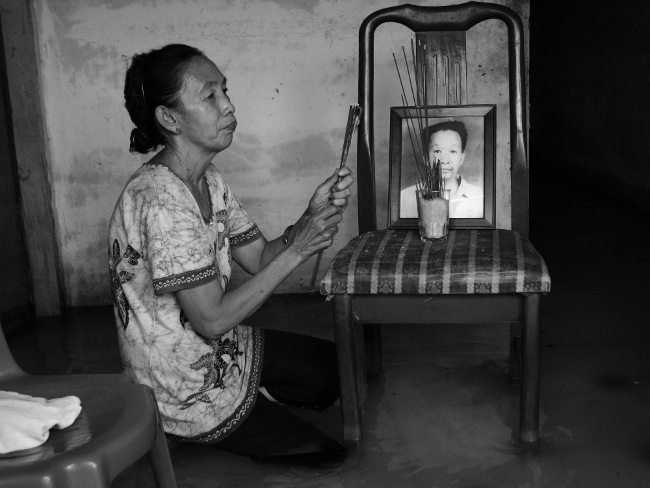 Theng Soen Nio kneels before an image of her deceased husband. While most Cina Benteng are Buddhist or Christian, a Confucian respect for dead family members is almost universal. Photograph by Poriaman Sitanggang. Copyright 2010 Poriaman Sitanggang / PNPM Peduli.

“The indigenous Indonesians, the pribumi, hate us for being Chinese. The Chinese despise us for our black skins. They say we’ve gone native. We aren’t welcome in Indonesia and we can’t go back to China.”

My family has lived in Indonesia for more than nine generations. Our ancestors came from China, but we’re Indonesians. We were born here and we’ve lived here all our lives. But we’re outcasts. The indigenous Indonesians, the pribumi, hate us for being Chinese. The Chinese despise us for our black skins. They say we’ve gone native. We aren’t welcome in Indonesia and we can’t go back to China.

My family comes from Balaraja. My father had a patch of land. It was big enough to grow rice, corn, and vegetables for the whole family. My father was quite well off, but he had eight children. My brother still lives on the land there, in an old wooden house. It’s a traditional Cina Benteng style house. It hasn’t been repaired or looked after for years. My brother isn’t as smart as my father was. He sells land and then just spends the money. It all goes up in cigarette smoke.

There is a lot of social jealousy against the Chinese who own land. In the area my family lived, we always got on well with our neighbors. The indigenous Indonesians used to protect us from outsiders. In some other areas, it was quite dangerous. During the Communist coup attempt in 1965 a lot of the indigenous Indonesians accused the Chinese landowners of being communists. A lot of Chinese were killed. My uncle was killed. He was a martial artist. He was famous. People were scared of him. The neighbors accused him of being a Communist. He disappeared and we never heard from him again.

My husband was taken away for a few days. A lot of Chinese were taken away on suspicion of being Communists. My husband was only held for three days, then he was released. He said the Army officials inspected his hands to see whether he was a farmer or a Communist spy. They saw he had rough, callused hands, so they let him go.

I’ve lived in Jagal Babi for more than twenty years, since I married my husband. The rich Chinese from Jakarta raise pigs in huge farms here. The rich Chinese don’t have anything to do with us. The river used to stink of pig shit all year round. It still floods every year. Every year, the water comes into the houses along the canal. It usually comes up to your knees. It’s not as bad as it used to be. We used to have to walk along a bamboo platform. People used to slip on the bamboo and fall into the river all the time. Now there’s a concrete path. It was built by the local authorities when Megawati was president.

We own the house we live in, but we don’t own the land. That belongs to the government. It’s a small block, about five meters by seven. A couple of years ago, the people in the kampung tried to start paying land taxes, but the district officials wouldn’t let us. If you start paying taxes, then they can’t kick you out later. If you pay taxes, it means you have a right to stay here. We’ve got electricity. Each house has its own meter.

I’m 67. My husband died ten years ago. I still remember him. I still light incense and pray for him. I’m a Buddhist. Buddhism is about respecting the spirits of our ancestors and our family. I was married more than fifty years ago. I was married when I was seventeen. When we got married, we had a party for three days. There was a feast for all our family, and dancing. We didn’t register our marriage with the authorities. No one did back then. On their birth certificates, my children are listed as illegitimate.

Things are different now. It’s important to have your documents in order. I made sure my children’s births are registered. I gave them Chinese names, not indigenous names. I’m proud of my culture. I like the idea of a festival to celebrate Cina Benteng culture, with a mass wedding for couples who don’t have marriage papers. Nobody wants to live in sin. Nobody wants their children to be considered illegitimate. If we had a mass wedding with a festival, people might realize that we’re Chinese, but we are Indonesian too.

We have our own culture. It’s a mixture of indigenous and Chinese. We have our own wedding costumes and ceremonies. We have our own architecture. People don’t know that. Even our food is different. It’s Chinese food, but it’s different from the food in the restaurants. My son and I make Cina Benteng–style pork sate and sell it through small food stalls near here.