Papua has been more severely affected by HIV and AIDS than anywhere else in Indonesia. At least 2.4% of young adults are HIV-positive. Sex between men and women is responsible for more than 90% of new HIV transmissions.

Tanah Papua occupies the western half of the island of New Guinea and some smaller surrounding islands. Its geography, history, culture, and economy make it distinctly different from the rest of Indonesia. It covers a huge area and is very sparsely populated. Its people are made up a vast number of different tribes and groups, many with their own languages and cultures. The great majority of these people live in rural and sometimes very isolated areas. In the coastal towns and mining centers, there are large numbers of migrants from Java, Sulawesi, and elsewhere in Indonesia.

Tanah Papua is one of the richest regions in Indonesia. It also has some of the country’s direst poverty. Mining and logging operations generate enormous revenues, but almost half the people live on less than a dollar per day. Medical services are often poor, particularly in remote areas. Education levels are much worse than average. Undereducated men and women from rural areas travel to towns and mining centers to earn a living as laborers, often leaving families behind.

In general, Papua has been more severely affected by HIV and AIDS than anywhere else in Indonesia. In the rest of the country, the virus is largely concentrated among high risk groups. In Papua, the disease has become a general epidemic, with at least 2.4% of young adults testing HIV-positive. In the rest of Indonesia, most new cases of HIV result from the sharing of needles by drug users. In Papua, sex between men and women is responsible for more than 90% of new cases.

There are many reasons for the high rate of sexual transmission in Papua. There is a general lack of awareness regarding HIV and how it is transmitted and a low level of awareness regarding the effectiveness of condoms to reduce the risk. Condoms are often hard to find, particularly in rural areas. A lot of people have sex with many different partners, including sex workers.

Sorong is a large port town on the north coast of Papua, the hub for the region’s oil and gas industry. More than half of the people came here from outside Papua. Most of the rest are migrants from rural districts in Papua itself, looking for work. There are considerably more men than women in the town. The town has a large sex industry, with women from Java, Manado, and elsewhere, working from bars, clubs, and brothels. Mainly Papuan women sell sex in parks and on a strip of beach near the harbor. The town has one of the highest rates of HIV infection in the region and, indeed, the whole of Indonesia.

To help those facing discrimination and stigmatization and to provide other services, a group of people living with HIV have established a peer support group called Sorong Sehati. Sorong Sehati was established with some support from the Spiritia Foundation, a Jakarta-based organization that has played a powerful role in developing a network of such groups across the country. In total, it has supported the establishment of at least 64 peer support groups in 27 provinces. Like Sorong Sehati, each of these groups is almost entirely autonomous, established and managed by local activists. However, Spiritia plays an important role by providing advocacy materials and training for these activists. Often, it helps the activists to visit more established groups elsewhere.

At present, Sorong Sehati receives virtually no financial support from the government or from outside agencies. It operates on a tiny budget in premises donated by Yayasan Saint Augustina, a Catholic medical mission managed by Sister Zita Kuswati. In addition to providing a meeting space for the Sorong Sehati peer support group, the mission provides medical services for people with HIV and AIDS. 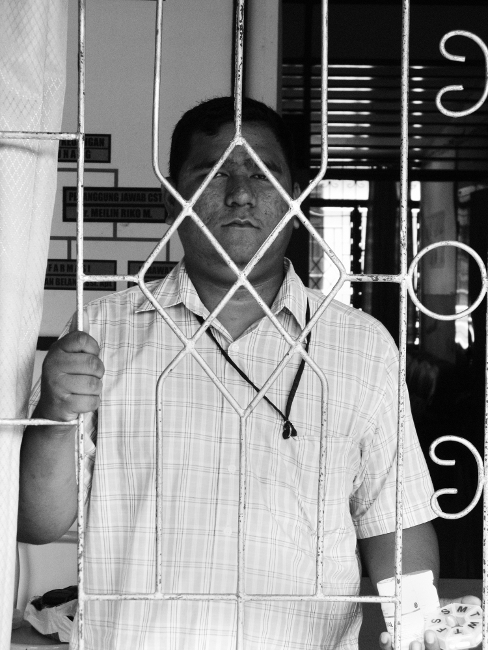 “My parents didn’t cope well, either. They didn’t know anything about HIV. They were scared. I wasn’t allowed to eat with the rest of the family. If I came into the room and sat down, they got up and moved away.”

I’m HIV-positive. I was first diagnosed in October 2003. When I was younger, I used hard drugs in Makassar. That’s where I was born. My family sent me to Sorong to try to clean up and get off drugs. And I did. After I kicked drugs, I read about HIV and AIDS. I wanted to get tested. My sister-in-law was a doctor. She helped arrange the test for me. Then I found out that I was positive. My sister-in-law reacted badly. She was ashamed to have an HIV-positive brother. She thought that if people found out, they’d think badly of the whole family, so she sent me back to Makassar.

My parents didn’t cope well either. They didn’t know anything about HIV. They were scared. They made me eat with my own cutlery and plates. I wasn’t allowed to eat with the rest of the family. If I came into the room and sat down, they got up and moved away. They set aside a separate bathroom for me, which no one else used. I had to wash out of my own bucket. My parents were terrified that other people in the family would find out. At the time, I didn’t know much about HIV myself. I went to a self-help group in Makassar. They gave me some information. They explained that HIV wasn’t really very infectious. My parents were still scared. In the end, I couldn’t stand living at home. I decided to go back to Sorong. I didn’t stay with my sister-in-law. I stayed with a friend. I didn’t tell him about my status.

I was quite healthy. I responded well to the antiretroviral therapy. I received treatment free of charge through the local hospital. My viral loads were low. My weight was normal. Through the hospital, I started working as a volunteer for the provincial health department’s HIV information programs. Eventually I received a small salary. Out of eleven educators in the program, I was the only one who was HIV-positive.

I was sent to Jakarta for training. In Jakarta, I met some people from the Spiritia Foundation. Most of the people at Spiritia are HIV-positive. They operate on the principle that HIV-positive people should help each other. They pushed me to set up a self-help group in Sorong. So together with two HIV-positive friends, I set up Sorong Sehati.

Spiritia told me about a sympathetic doctor in Makassar. I went home to Makassar. With the doctor, I visited my parents. He made them realize that HIV wasn’t as infectious as they thought. Their attitudes began to change. They weren’t so scared. They still don’t want anyone else to know about my status, though.

I’m quite open about my status. When I’m talking about HIV and AIDS, I try to judge the audience first. If I think they can handle it, I tell them about my status. If I don’t think they can cope, I keep quiet about it. Sorong Sehati has made people more aware about HIV and AIDS. We had one member, a bank employee, who was HIV-positive. His employer found out. They were scared. They threatened to fire him. Sorong Sehati went to the bank with a doctor. We did a presentation to help them understand. They agreed to keep him on.

People who have just found out that they are positive need to know how to manage HIV. They often think that they can’t have children. They think their children will be infected. They worry that they will infect their husband or wife. If you know how to manage the risk, you can prevent that. I’m married. My wife is not HIV-positive. She’s pregnant. Before my wife got pregnant, a doctor checked my viral loads. With the antiretroviral treatment, my viral loads are low. That means the risk of infection is low. The doctor calculated my wife’s fertile periods. He suggested that if she wanted to get pregnant, we should have sex without a condom once a month during her most fertile period. She became pregnant and she’s still negative.

If people living with HIV have accurate information, they know how to cope with their condition. They can handle other people’s reactions to it. It’s a serious chronic disease, but it isn’t that different from diabetes or high blood pressure. The main difference is that people are scared of it.