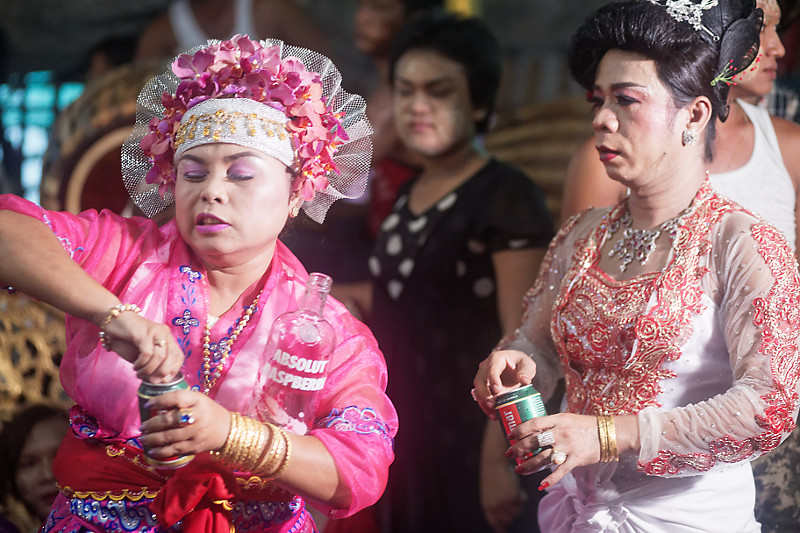 The nat are a pantheon of spirits of powerful historical or semi-historical figures, usually royals, powerful rebels, or folk heroes, who experienced violent deaths that prevented their reincarnation and left their spirits to roam the earth and to continue to play a part in human affairs, often by causing natural disasters and other cataclysmic events. Negotiations with the nat takes place in a temporary shelter erected to accommodate a shrine, at which a band of musicians and the nat kadaw perform, with the nat kadaw often consuming large amounts of alcohol and tobacco as an aid to entering the trance state. As Tamara C. Ho says, the nat “…have notorious reputations as foulmouthed characters, lecherous seducers, shameless drunkards and inveterate gamblers,” with the festivals to propiate them “… inspiring public, carnivalesque debauchery.”

The anthropologist Ward Keeler describes a meeting at the home in Yangon of a rather supercilious senior Burmese government official, who allowed Keeler to visit occasionally so he could lecture him on Burmese culture and society. On one occasion, Keeler questioned him about Burma’s cult of the nats, or “the thirty-seven spirit lords,” the pantheon of spirits of powerful historical or semi-historical figures, usually royals, powerful rebels, or folk heroes, who experienced violent deaths that prevented their reincarnation and left their spirits to roam the earth and to continue to play a part in human affairs, often by causing natural disasters and other cataclysmic events. Keeler asked the official about the ceremony known as the nat pwe, at which a ritual specialist, a nat-kadaw, or “nat wife” plays a central role.

As Keeler states “… negotiation with these spirit lords is undertaken by mediums, who in a shaman-like role go into a state of trance and thus become a conduit between the spirit and the client,” usually to seek the nat’s assistance in gaining some advantage or resolving some personal crisis affecting the client in the area of his or her personal or professional life. The negotiation with the nat takes place in a temporary shelter erected to accommodate a shrine, at which a band of musicians and the nat kadaw perform, with the nat kadaw often consuming large amounts of alcohol and tobacco as an aid to entering the trance state. In this state, she acts as a conduit between the sponsor and the nat. These events are usually open to the public, with the general exuberant consumption of alcohol a common occurrence. As Tamara C. Ho says, the nats “…have notorious reputations as foulmouthed characters, lecherous seducers, shameless drunkards and inveterate gamblers,” with the festivals to propiate them “… inspiring public, carnivalesque debauchery.” Keeler notes that despite the fact that sponsor is usually a powerful, high status individual, in the possessed state, the nat kadaw can address him with a degree of familiarity and frankness that would be unacceptable in day-to-day interactions.

In response to Keeler’s question, the official smiled patronizingly and told him that civilized Burmese citizens were Buddhists, and that only ignorant peasants in the villages and the lowest class of city dwellers still sponsored or attended such ceremonies, or otherwise sought the aid of the nats. Keeler raised an eyebrow and pointed to the household alter, in the same room where the two men were conversing, where a statue of a Popa Maedaw, a ferocious and fickle female nat believed to reside on a volcanic mountain of the same name, sat in pride of place, only slightly lower and to the left of the central position occupied by a statue of the Buddha himself. The official had the grace to look slightly embarrassed, and muttered that the statue of the nat was only tolerated at his wife’s insistence, that he himself deprecated its presence. The next time they met to continue their discussions, the official invited Keeler to sit elsewhere, where Popa Maedaw’s visage could not be seen.

The tale says much about the prevailing attitude towards the nat cult. As a text on the subject by Mariko Walter and Evan Fridman states, while normative Buddhist belief places much emphasis on the qualities of generosity, restraint, equanimity, social harmony, detachment and mental discipline, “… the veneration of nats gives social reality to a host of emotions Buddhist practice discourages explicitly: hatred, greed, and desire; attachments, licentiousness, and jealousies; unhappiness over misfortune, illness, and the loss of social power more generally.” With the apparent contradiction between normative Buddhist belief and belief in the propiation of the nats, the anthropologist Melford E. Spiro stated that the Burmese world view “… is informed not by one, but by two religious traditions, an indigenous spirit cult and one of the great world religions, Buddhism, an import from India … [with these being] two separate, albeit interrelated religions.”

However, if they are indeed two separate religions, they certainly do not relate on terms of equality: as the comments of the official above indicate, the nat cult is deprecated and subject to semi-official disapproval, with this cult being, as Ho states: “… definitively subordinated and disciplined under the signs of tradition, the rural, and the unruly feminine.” Ho states that the semi-official disapproval dates to a decree in 1962 by Ne Win and the Burma Socialist Programme Party (BSPP) that “criminalized the supernatural,” with this decree “prohibiting the production of any film depicting nats, ghosts, witches, and so on as part of the Revolutionary Government’s efforts to remove the obscurantist influence of superstitious beliefs on the people.”

Ho notes that despite the increasingly intense official deprecation, nat pwe continued to take place, most often with sponsorship from powerful individuals associated with political elites. She also notes that at about this time, the role of the ritual specialist at this event increasingly came to be filled by transsexuals, whose social position and standing were as ambiguous as the prestige of the events at which they officiated. As Ho states: “These government restrictions apparently opened a professional vacuum that became increasingly occupied by a stigmatized minority called meinmasha or achauk, near synonyms which could be loosely understood as “transgendered/effeminate homosexual men.”

A novel by Burmese author Nu Nu Yi, entitled Smile as They Bow and describing a fraught love triangle between a famous, older transgendered spirit medium, his manager, and a young, female singer, the nat-kadaw relates how she was first drawn to her profession:

“In my hometown, gay or not, I had to look like a man. . . . I wasn’t a nat kadaw then, I didn’t know a thing about nats. Must have been my female hormones, I just wanted to doll up and dance—and have a boyfriend! To have every young man in sight fall in love with me. . . . It’s not like I had a choice to become a nat kadaw or not. This girl, let me tell you, she loves to dress up and dance. As soon as I set foot in Taungbyone, that nat blood, that nat spirit was in me. How could I see all that trance dancing and not picture myself possessed?”

The novel describes the events at one of the largest annual nat festival in Burma, which takes place in Taungbyone, near Mandalay, in honor of Shwe Hpyin Nge and Shwe Hpyin Naungdaw, two brothers who were bludgeoned to death at the orders of King Anawrahta of Bagan for neglecting their duty to provide a brick for the building of a Pagoda. This festival is one of several large festivals that take place annually, in the month Wagaung (August), with private sponsors often hiring pavilions to stage a small nat pwe at the peripheries of the major events of these festivals. Following this festival, two weeks later, a slightly smaller festival is held in Yadanagu, in Amarapura, also near Mandalay, to honor Popa Maedaw, the mother of the two brothers, the flower-eating ogress who lives above Mount Popa. The images in this photo essay were taken at the festival at the Yadanagu festival in September, 2016.

A festival of the deprecated spirit lords of Burma